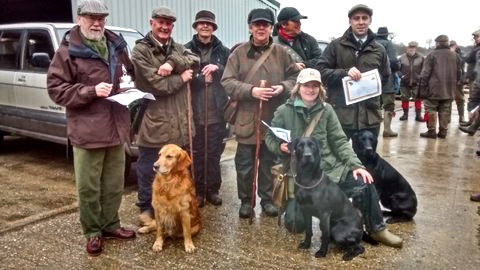 Trial report for Wolverton Park Shoot yesterday 3/1/15 our second novice of the season so far.

Breakfast meet at the Sandford Spring Golf club for judges and helpers set thing off to a good start. Despite very heavy  overnight rain and wet conditions to start the trial. Guy Pike and his family and syndicate were terrific, incredibly helpful even though they have never had a trial there before, guns shot very well and selected really good birds. The ground was rough unimproved  pastureland so it was ideal with cover all around. The first drive included duck , pheasant and partridge dropped over a large area which allowed the judges to finish the second round on this drive. The guns returned from another drive on their own to shoot the return drive to the first . Judges took all dogs  still in forward and  concluded the trial on this drive. Judges were Nick Coates,Robert Worrall, Liz Barnes and Annie Buckley. Our thanks to them for an excellent job. and congratulations to:

The Winner of the game trophy : Echobrook Baxter.. Ron Taylor