Guildford WGC was represented at this year’s Edenbridge & Oxted Show Retriever Challenge, hosted by SEGS, by Sophie Mills with Turnerbrook Oak, commonly known as Nell, and Jean Baveystock with Lakesfarm Martini, commonly known as Marti.   The object of the day was to demonstrate to the public how gun-dogs are trained to work as well as to show them the final polished article.

Although the ground was extremely churned up the sun shone, we had a gentle breeze & scenting conditions improved as time went on.

There were five interesting tests under one Judge, the kindly Ron Jeffery & the 15 dogs ran at intervals over the day.  Part of the problem working one’s dog was the noise from the crowd & the commentator, also plenty of baying from nearby Fox hounds. Difficult for the dog to hear your whistle!

Sophie came 4th. which was a great achievement as she beat some very good dogs. Sophie & Jean say a huge thank-you to SEGS whose organisation was perfect 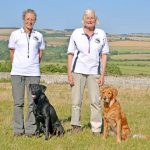 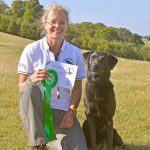